A Sense of Space

A Sense of Space is for flute, guitar, and soprano with percussion. It works with different levels of magnification of instrumental timbre that reveals shades of grains and particles. The particulate sound vocabulary includes scratching on guitar strings with different durations and speeds, the sounds of crumbling shredded bamboo, and the brushing of sandpaper on wood.

more about the programme note

The vocalist with her phonation of breaths and whispers emulates these qualities. The piece is without words or text. Instead, language is disassembled down to phonetics, vowels, fricatives and air. Similar categories of timbre sit within a spectrum that can be identified as distortion or an airiness of tone. Degrees of density or resistance are shaped, where physical pressure is the key parameter for controlling the audibility of the graininess or grittiness of each surface.

My instrumental approach is also about articulating a kind of dynamism through gestural variations, where parts of the score are also recycled but may go unnoticed because of their slight alterations. Time may appear to want to move forward but is stopped by an uncanny sense of stasis. Pauses and attenuations often occur after sections that are populated with the dense sound activity of a flourishing string of micro-tonal pitches, and parts offset in uneven rhythms. The frequent interpolation of rests as well as quiet passages allows the sounds of the performance space to become more present to audience attention. For me, the sounds of the space where intended to be listened to during these moments and are part of the work. The audience are therefore encouraged to listen openly and embrace the sounds around them during the piece.

more about this work's connection to sound gestalt theory

The following text is an excerpt from my PhD research which shows how instrumental music can be viewed through a lens of sound gestalt theory – based on the research of psychologist Albert Bregman.

Bregman’s work on gestalt theory provides a useful tool for understanding my compositional choices in A Sense of Space. Some key gestalts I’ve drawn on are stream segregation, timbre segregation, and gliding tone continuity through noise bursts.

Stream segregation refers to the ability to differentiate between high and low pitches and noise concurrently. If pitch or noise is separated into high and low frequency bands, we are able to hear them as two independent streams (Bregman & Ahad, 1990, p. 11).

Pattern recognition, within and across perceptual streams 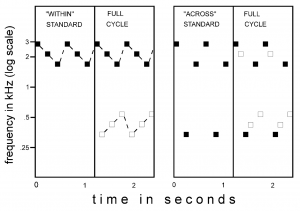 This separation will also be strengthened if there is timbral segregation (Bregman & Ahad, 1990, p. 26). 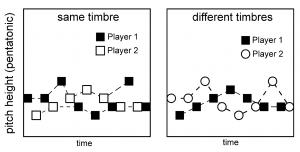 However, Bregman’s studies on pattern recognition show that when there is rapid movement across the perceptual streams it can be difficult to pay attention to meaningful pitched activities occurring at the same time. This is to create the effect of sounds interfering with one another, resulting in an ambiguous blur, with details missed on first listening. When listening to my piece I am sometimes able to determine the individual timbres of the ensemble, whether this is the guitar playing clear pitched sequences or more fragmented breathy grains of sound. As the speed and the amount of activity increases I am no longer able to pay attention to all the details that move rapidly through the high and low perceptual streams. A kind of perceptual overload occurs, a fast mesh of sound.

A compositional strategy I use is to place two instruments of similar timbre in the same range such as the flute and the high strings of the guitar. The purpose of this is to create ambiguity of instrumental timbre, that can possibly lead to misperceptions of listening, and the necessity for multiple listens to determine what is happening. This occurs throughout the piece, where there is an alternation between timbral integration and timbral segregation. A similar example of this is when the light crushing sounds of the bamboo, masks and distracts from the pitched material, or the clarity of another sound, or during moments of rest. I do this to create interference between the sounds, and to break up the clarity of the instruments, increasing their sense of unpredictability.

This is somewhat comparable to the examples of ‘noise bursts’ given by Bregman. He claims that when a sound is followed by a more complex or intense sound the auditory system tries to detect continuity with the preceding sound (Bregman & Ahad, 1990, pp. 60-70).

Perceptual continuation of a gliding tone through a noise burst

Whilst my intention is not to create textbook examples for Bregman’s theory, the work can usefully be considered a study in perceptual continuities and discontinuities. I am interested in expanding the definition to include textured sounds of indefinite and definite pitch. This is to shape different levels of timbral continuity as well as effects of repetition around fragments, which have swarming characteristics. The auditory phenomena triggered by ‘noise bursts’, is also of interest as a strategy to create effects of continuity despite surface discontinuities. In A Sense of Space, any loud, short, and relatively complex sound, can act in this way. But they also go through transformations as timbral variations, nuances, contours, and dynamic expressivity. They sometimes act as distractors but are also focal points of interest and integrate into larger swarms of activity. This opens up another perceptual entity, around foreground and background features, distinguished not necessarily due to differences in volume, but as a result of the complexity of the sound or noise spectra, that masks other sounds momentarily.

Excerpt from A Sense of Space, bars 118-123, showing a perceptual overload (the mesh), with examples of both timbral fusion and segregation, high and low streams, with localised grains of sound.

This is an example of the gestalts at play in the score. You can see the high and low streams blending together across the instruments, the grains of sound and noise and their continuity, and the timbre integration and segregation. Creating a swarm of sound, or a mesh.

The work was selected for the website Sheer Pluck – A database of contemporary guitar music, by guitarist, co-author, and co-founder Seth Josel.

This database of contemporary guitar music is designed to provide a resource not only to “pluckers”, but potentially to journalists and scholars who are interested in the development of contemporary music in the 20th and 21st century. As well, Sheer Pluck is hoping to promote the guitar’s repertoire – which clearly is expanding in a most dramatic way at present – and stimulate further discourse and composition.