Below is the first probability matrix used in the piece.

Here is more of a fixed diagram which also shows the k-core groupings and probability data, which I call a probability ‘cloud’ – a form of metamodeling (a model of a model). 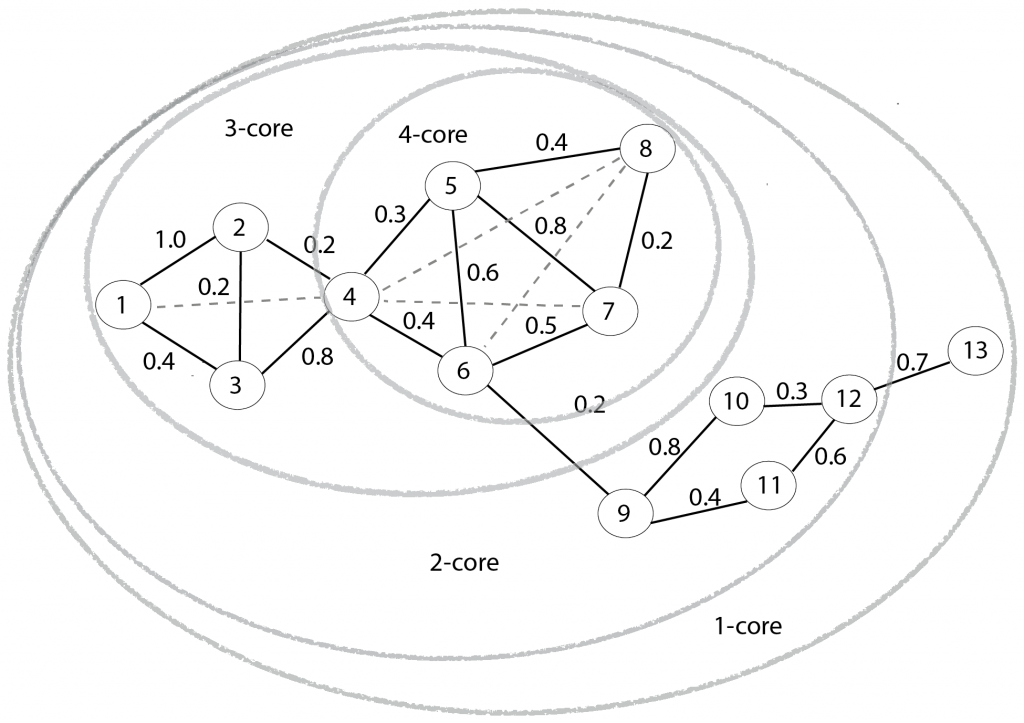 The decimal numbers that appear on the lines are probability data.

There are 3 transitional probabilities clouds: one to decide the horn parts (that I call ‘musical meshes’), which also have theatrical instructions, another to decide the microtonal sequences, and the third is for the electronic material. These processes symbolise to me the structures of the world we live in. Like how our brain structures coincide and intermingle with internet algorithmic structures (search engines results, targeted media, news and advertisement) – a conglomerate of relations with companies who have vested interests – different to that of our own and sometimes at the expense of our interests, desires and needs. This then is also predetermined by the unique aspects of our environment. Felix Guattari calls these The Three Ecologies (which was his final book of the same name). And how they all correspond, intersect, and overlap in strange and curious ways. This music performance offers a space to contemplate the size, scope, and absurdity of these ecologies, attempting to embody the quasi-chaos, in the hope to find a way through.

You can hear more about this in an interview with Brian Massumi and Erin Manning talking about their 3 ecologies institute that was influenced by Guattari’s book on the ‘Remembering Your Body’ podcast.

It’s also interesting to note that k-core decomposition has been used to study ecological resilience and has provided insight into the survival of mutualistic networks during times of environmental change. (Garcia-Algarra, Pastor, Iriondo & Galeano, 2017)

In my piece, a video is used to capture the data and then sequences of numbers were selected to put together the score (letters are converted into numbers A=1 B=2 etc.) For instance, the opening sequence of the piece is 13 10 13 10 (1-core) then 9 6 5 7 6 9 6 5 8 5 7 6 9 (2-core). The 1-core sequence is the beginning of the video and the 2-core sequence was found at 2’47”. Converted back into letters they are: L J M J (1-core) then I F E G F I F E H E G F I (2-core). You probably can’t tell just by looking at the video, but each node is an intricately performed action on the horn using irregular and unstable states, such as a half valve pitch technique, split tones, irregular breathing, vocalisations, dynamics changes, wavering flutter and rapid alternations between single, double and triple tonguing. There are also theatrical elements such as delicately caressing the horn with a large white goose feather. And another where two people stand either side of a horn player each holding long pieces of black fabric tied to the outer tubing, and they walk around the horn player, slowly wrapping, ‘suffocating’ the player in the fabric while the piece is being performed. The outside performers move in a spiral formation, restricting and covering the player’s movements. The horn player needs to make the best effort to continue playing even with hand and vision restrictions as this process unfolds.

Wrapping the performer in this way to me resembles a form of mummification. Many cultures had mummification such as Peru, Chile, Torres Strait, China and Egypt. There was also a practice in Japan that is now outlawed that involved self-mummification. Shingon monks of Yamagata in Japan are one example who practiced a ritual of mummifying themselves while still alive. Monks would dehydrate their bodies and would adopt a diet of “tree-eating” – involving pine needles, tree bark, resin, tree root and tea from a urushi tree (containing arsenic). They also found river stones in their bellies. This piece makes subtle references to this practice such as when two outside performers strike stones together as they slowly wrap the body of the horn player. In the Japanese mummification process, a breathing tube was often installed to allow the monk to breath his last breaths while buried underground. It’s as if the player on stage is breathing their last breath from the horn until their body eventually dries out and shuts down. 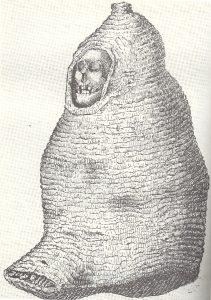 See below the next matrix used to determine microtones. 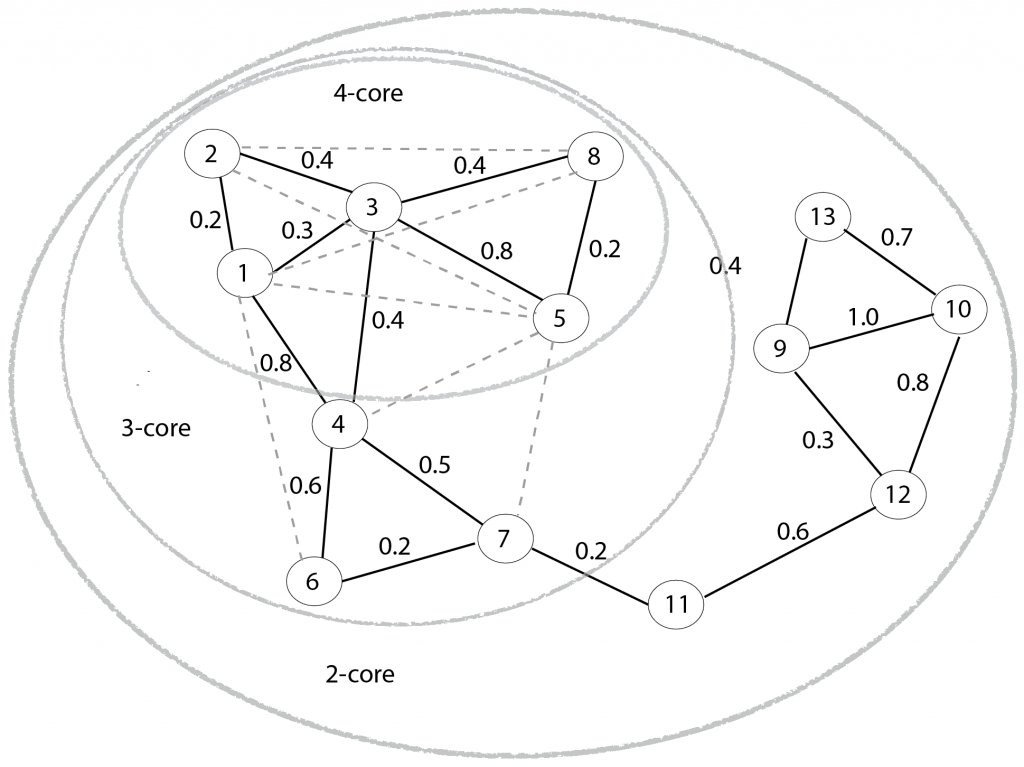 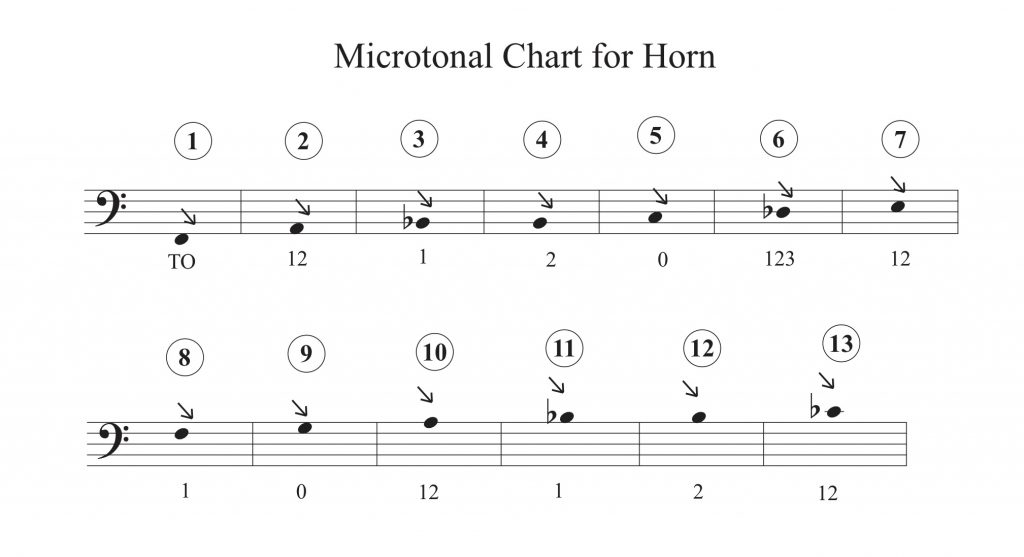 The matrices are seen more as mental concepts that signify relationships between fluid mesh like structures. Like living-nodes that bind together bundles of parametric dimensions of sound and movement.

See below an example of a codified node turning into something resembling a living-organic structure.

Another definition of the k-core concept describes it as:

An architecture of uncorrelated complex networks with arbitrary degree distributions as a set of successively enclosed substructures. 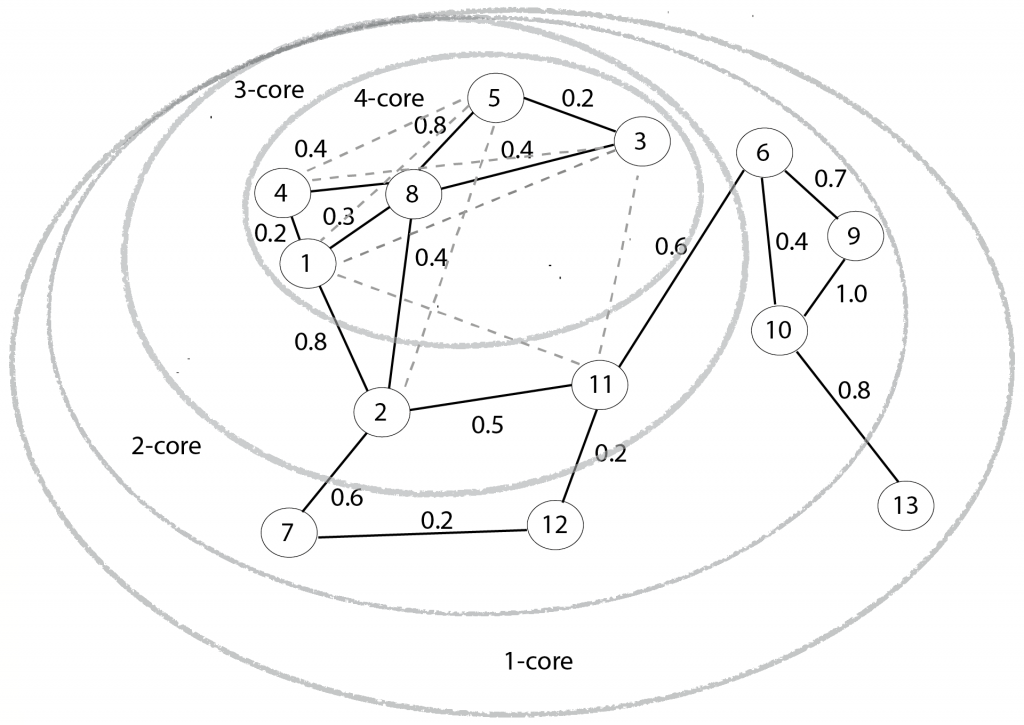 The recording contains various degrees and intensities of noise, silences, low frequency microtonal sine waves, and recordings of the throaty coughs and growls of a territorial brushtail possum. This marsupial has a haunting guttural phonation, which complements the ominous sounds the horn is capable of, such as the deep hollow breathing sounds with obscuring embouchure changes, growls, long held vocal fries into the mouthpiece, and the use of low register. I came across this rather peculiar sound made by the possum during a recent camping trip near Awaba, also known as Lake Macquarie in New South Wales, Australia.

Sine-tone oscillators were made using the draw function in the program SPEAR. These tones move as glissando with multiple tones playing at the same time creating various beating effects. You can also see below an installation I made called the ‘glass of imagination’. It involves images and videos of the processes that were used to make the electronic material. This includes rubbing the rim of wine glasses, a bell ringing, whisk on a glass vase, guitar string grinding, radio static and an electric fan hitting a series of differently tuned glass bottles.

The ‘Glass of Imagination’ 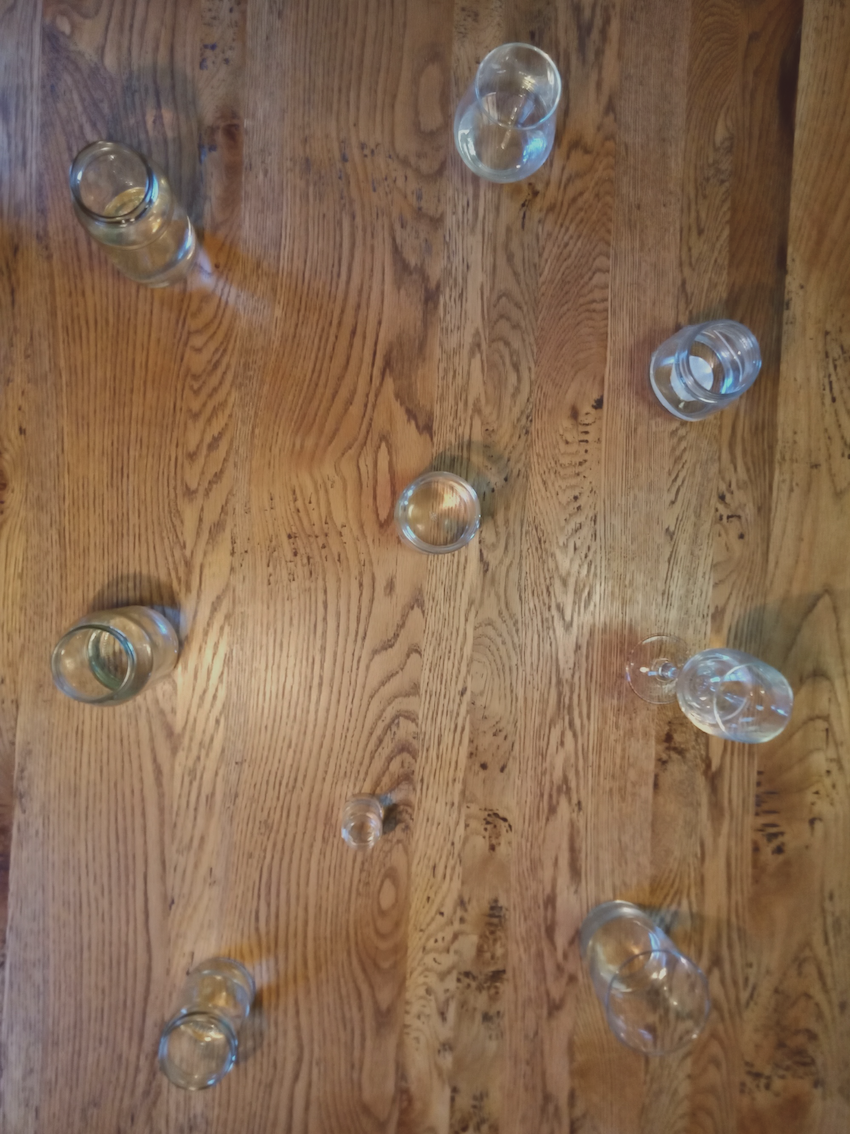 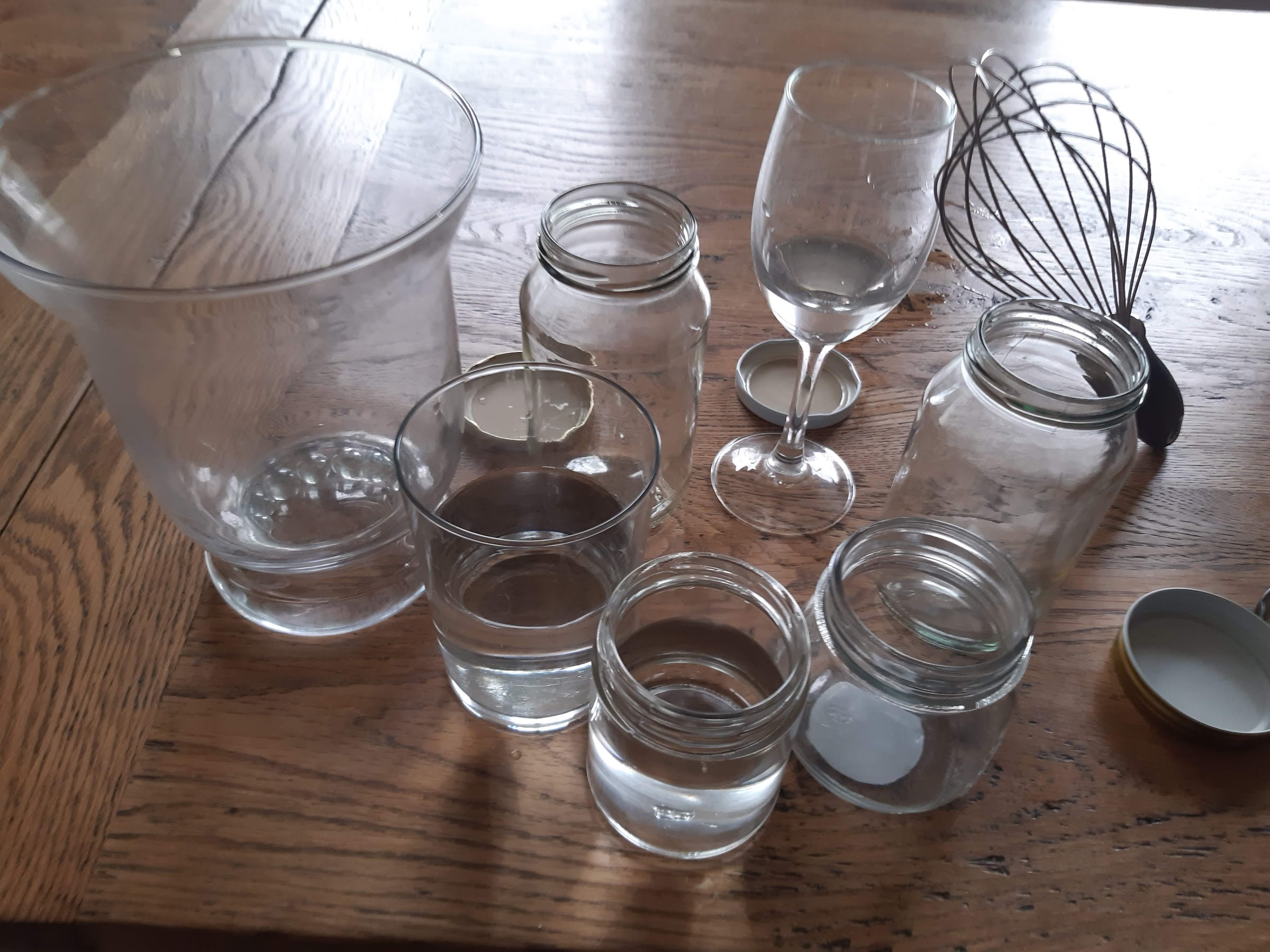 (right click to loop videos, press < > to change speeds and numbers 1-9 to skip through videos,see full list of keyboard shortcuts)

(best viewed on a laptop, in Google Chrome.) 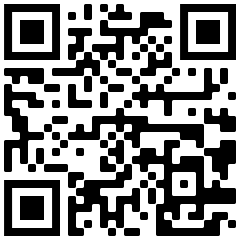 (You can use the QR code to share between devices as people spread out (and move) across the performance space.)

These videos can be used to replace the fixed electronic backing track, to instead become an online interactive performance performed by audience members.

The bells is a reference to the Japanese cultural practice in which a bell was left with the person when they buried themselves alive. When the bell stopped it would usually indicate the person had died. I also utilised a percussion technique of concealing a personal sized electric fan in the palm of the player’s hand. The blades have metal wires attached and is held inside the bell of the horn. As the fan spins the metal wire makes contact with the instrument. The performer slowly moves the fan around where the movements are ad lib to allow for the unpredictable behaviour of the motor as it stutters.