Water Pail is a sculpture and sound art installation about the artist’s Donna Chang’s intersectional Chinese-Australian identity and her mother’s and her maternal grandmother’s life in Hong Kong during the 1960s-80s. The work is based on the stories we documented from Donna’s mother, Monica. Monica lived during Hong Kong’s water famine, and experienced significant hardship and poverty. As a young child Monica had to carry a pail of water up multiple flights of stairs everyday to get fresh water.

In a video work, Monica’s voice recounts the story of a family inheritance in which only men could take over assets, leaving Donna’s grandmother impoverished. The water pail represents the labour/burden that migrants, their descendants, and their forebears have to carry, and the intergenerational effects. It is also a reminder of the very real water crises we face.

The music is an immersive 8 channel haptic sound artwork responding to the stories and sculptural objects. Many of the water pails in Hong Kong during that time were repurposed cooking oil drums. The work explores their historical significance and sonic potential in an 8 channel array of these drums, each containing transducers that vibrates and distorts the surface of the metal. The red Chinese words imprinted on the drums say: 水 = water 女 = female 马 = horse 劳 = work 兔 = rabbit 家 = family – Donna’s mother was born in the year of horse and Donna, year of the rabbit, representing matriarchal lineage. While 8 drums were used for this installation, future iterations of this work could include any number of these pails (10, 16, 21, 40 etc.) so they fill the entire space, and can include multiple percussionists. Donna performs a solo percussion piece on a bamboo/water pail structure (which sits on top of a lazy susan allowing her to turn it.) The work is a composer/performer theatrical piece devised in collaboration with Daniel. The music is inspired by experimental music, and new music theatre. Drawing on Helmut Lachenmann’s musique concrète instrumentale, Mauricio Kagel’s absurdist instrumental music theatre, and Harry Partch’s instrument building. The solo performance is accompanied by the ‘oil drum chorus’.

The work was described in the newsletter: Music & Music Therapy Discipline, Volume 3, May, 2021 – “The works use of absence through image isolation, blackness and silence within a growing grating biting of sound that suddenly disappears is disturbing and poignant. Its beauty is absence of sound and sight to make the isolation of shape and materiality of sounds poignant—representative perhaps of trauma within a materiality-metal bamboo and timbre harshness envelope highlighted by absence which speaks to both a specific cultural context and the human condition.”

The artist Daniel also talks about his journey of how he found the oil drums – “I was wandering through the alleyways of Marrickville (Midjuburi). There’s always strange, wonderful and odd things to be found there. You never know what your going to stumble upon. I started to notice oil drums stacked outside the restaurants, and this is what gave me the idea for the installation. At the time, Donna and I were in the process of connecting Monica’s story to the material world. I decided to go out in the middle of the night when all the restaurants were closed and see if they have left any drums outside. Sometimes I was successful, sometimes not. It was a painstaking process as I started to get particular about the type of drum I was after. There was a wide range of oils to choose from. Marrickville is known for its Greek and Vietnamese restaurants. There were some I’ve never heard of such as soybean and cottonseed oil, but there were plenty of Greek branded olive oil to choose from. Each drum was dented and beaten up in its own way, and I knew this would add depth and character to the sound when they were all placed alongside each other. I then went through a process of cleaning them and stripping the paint. Behind the outer covering of the branding was the plain silver metal tin and all the oil drums began to look the same. I like to think of it as our outer shell being stripped away. Like the facade we put on to face the world dissolving away to reveal our inner selves or our underlying equivalence.” 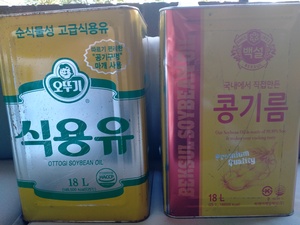 The work was exhibited at World Square, in Sydney, Gadigal Country, as part of the Now You Hear Her festival. Curated by Lamorna Nightingale, Bree van Reyk and Damian Barbeler, from the 8 March to 11 April 2021

As a backlash to the gender-based discrimination experienced by Donna’s mother, there was a historical “Female Inheritance Movement” in Hong Kong in the 1990s. The New Territories Female Indigenous Residents’ Committee (NTFIRC) campaigned to abolish the discrimination of women’s rights to inherit property. They encouraged their sisters to fight for their rights, using peaceful means, like signing petitions and singing songs, to lobby for public support.

In the plaza in front of the Legislative Council building, amid shining office buildings, the indigenous women, dressed in the oversized hats of farm women, sang folk laments with new lyrics about injustice and inequality. Demonstrators from women’s groups made speeches about gender equality and, at times, tore paper chains from their necks to symbolise liberation from Chinese customary law. (Chan 1995:4).

The campaign is considered a significant historical event in the Hong Kong women’s movement. It is a milestone in the struggle for gender equality through legislative means.  Here are some photos from that day: 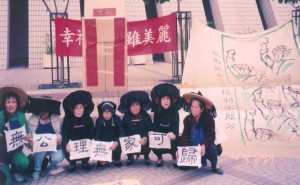 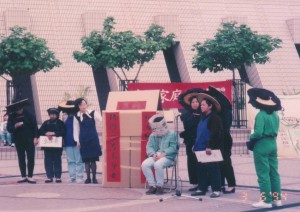 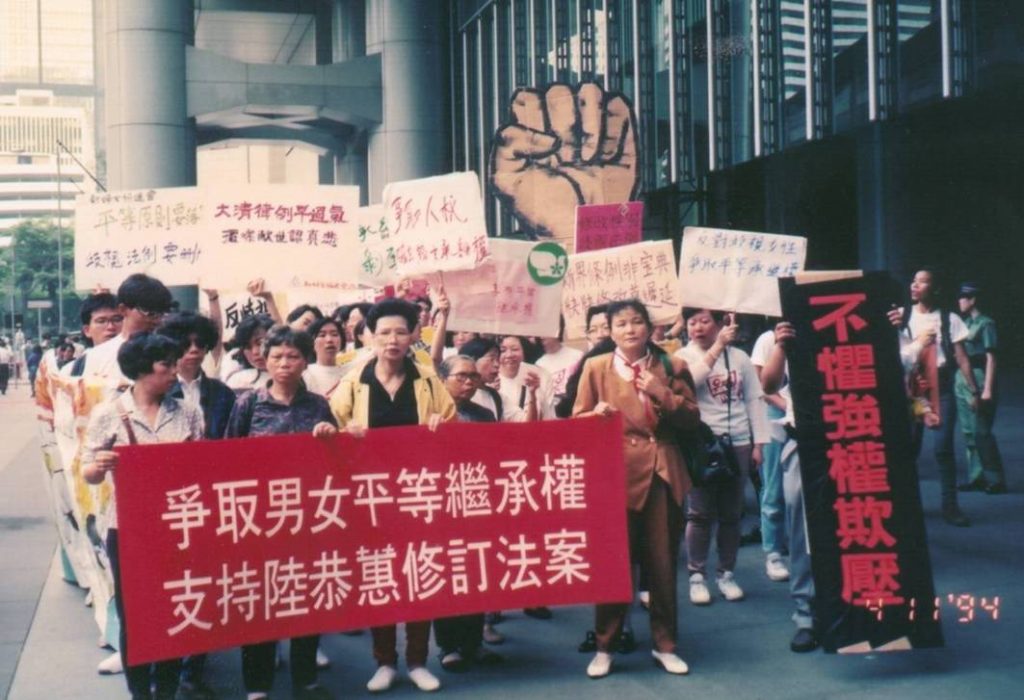