Mapping Australia is an experimental multimedia piece for piano, electronics, video score, live camera, and video. Archival footage of Australia’s cartography practices from the 1960s were transformed into a video score for a performer to engage with by tracing the movements in the video.

The footage used in the score documents the prospective sale of Australian land to foreign mining interests. The work is dissenting against the video and what it represents. Mining companies have continued to exploit First Nations people and have decimated sacred cultural sites in a place where land was never ceded.

This work draws on decolonial perspectives and critical cartography, bringing to the foreground the hidden agendas of cartographic practices which are used as a tool for socio-spatial power. It’s about the ruinous effects of extractive capital and an attempt at ‘counter-mapping’ through the video editing and scoring processes.

The interior of a piano is ‘mapped’ by the performer using a variety of percussion mallets, where the piano is segregated into ‘zones’. It explores the piano as geographic territory and criticises the ‘terra nullius’ idea in Australian history.

The sounds and performative gestures have a strong association to the film. The man’s pencil moving around on the map become the performer’s movement with a wooden mallet on the strings. The crumbling bark on a tree as it falls (after being bulldozed) are converted into the crunching sounds of bamboo. And the rock pick hitting hard rock in search of minerals turns into synchronised rubber mallet strikes on the stress bars. Footage of a large printing machine continuously and monotonously prints maps of Australia, which shows a heartless, corporate view that sees land as a product, with a false proprietorial, colonial mindset. The pitch choice played on the keyboard are a distilled reworking of the original triumphant music in the film. And the recording of the narrator speaking in Dutch emerges periodically throughout the piece which sits barely audible in amongst the sound field.

Further details about this project are published in a paper in Leonardo Music Journal, Volume 30, 2020. Also see an online interactive map that the reader navigates without a fixed path, published in the CeReNeM Journal – and a talk at a conference that was called Critical Cartography, Counter-mapping and aesthetics, in support of decolonial research and perspectives (Western Sydney University, 2020) – https://vimeo.com/467270563

This recording is to be put on a playback device and listened to on headphones by the camera operator. The camera-operator-performer should perform each instruction until the next instruction is spoken.

The verbal instructions include:

The three sine tone beeps that occur throughout the audio are there to signal that a new instruction is coming up and help prepare you for the next instruction. You can also choose to cover the eye of the camera creating a blacken image.

A technical diagram can be found here, long with an aerial view of the stage out. Finding ways of simplifying  the setup is encouraged.

All these objects and their modifications can be provided by the composer.

Below are 3 videos which explain how to read the video score, along with video examples of live interactions with the score. The footage comes from the archival video Mapping Australia (1966). These 3 videos form the basis of the piece: 1. Pencil On Map 2. Rock Pick Hitting Rock & 3. Map Engraving (with falling tree footage).

(These are not complete renditions of what the performance would be. They are for instructional purposes only).

Make contact with the piano using the wooden mallet when the man’s pencil touches the map.

Copy the movement of the pencil and his hand orientation as it moves along the map and also think about it’s position within the frame. Alternate between the two or do one or the other.

Hit the centre stress bar with the rubber mallet when the rock pick hits the hard rock and cracks.

The bamboo touches the strings when the map engraver touches the surface. Copy the movements of the engraver.

The piano is broken up into 13 different zones. The video score instructs which zone a current action is to be performed in. The player must move to the assigned zone and perform the action. The scale of the video is to be seen as relative to the size of the zone. Imagine that the video screen is stretched to the size of that given zone. Estimate this as best as possible. An animation can be found here. 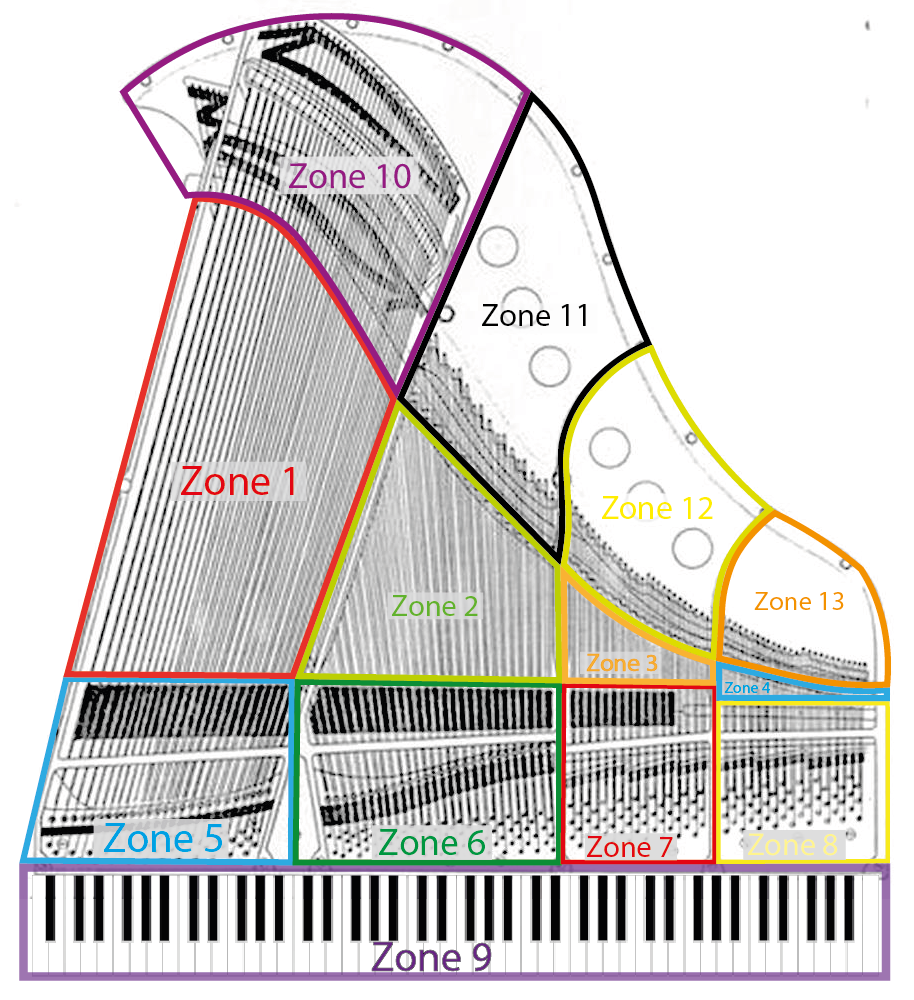 Examples of labeling zones on the piano

Earphones are placed in the strings of the piano. The earphones contain the audio from the original archival footage, Mapping Australia (1966), which is constantly playing and is activated when the performer waves a lapel mic over it. 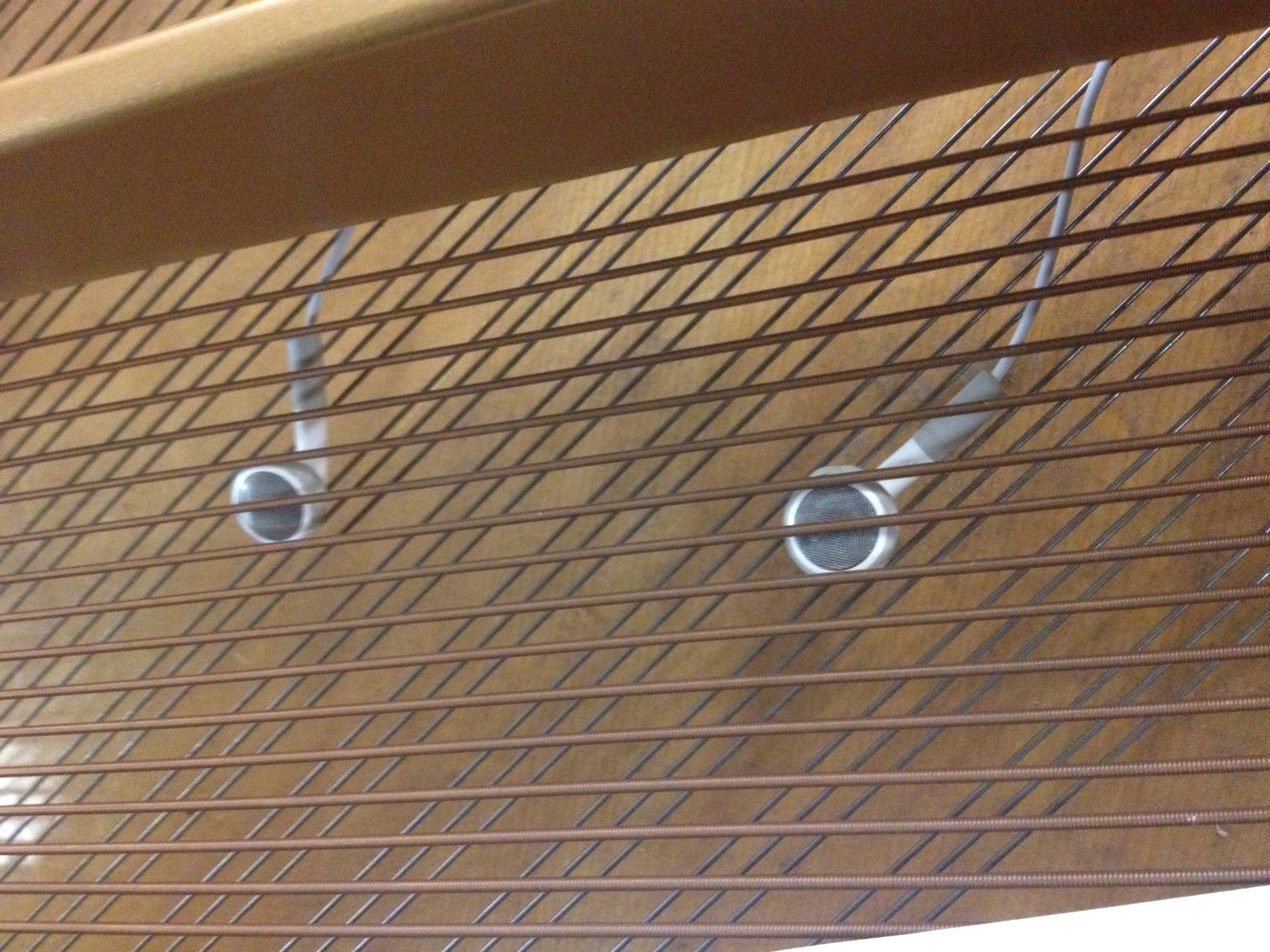 This is played throughout the entire performance. The audio needs to be loud enough so it is clearly picked up by the lapel mic but barely heard (if at all) when room is quiet with no lapel mic near it.

The track can be uploaded to a portable device for the earphones to plug into. The audio file can be found here.

An alternative video score with this sound embedded on it can be used as the source for the earphones. This saves having to use a second device. This can be found here.

This video showcases gestures using the fan, and the use of the lapel mic with the above recording playing through the earphones. 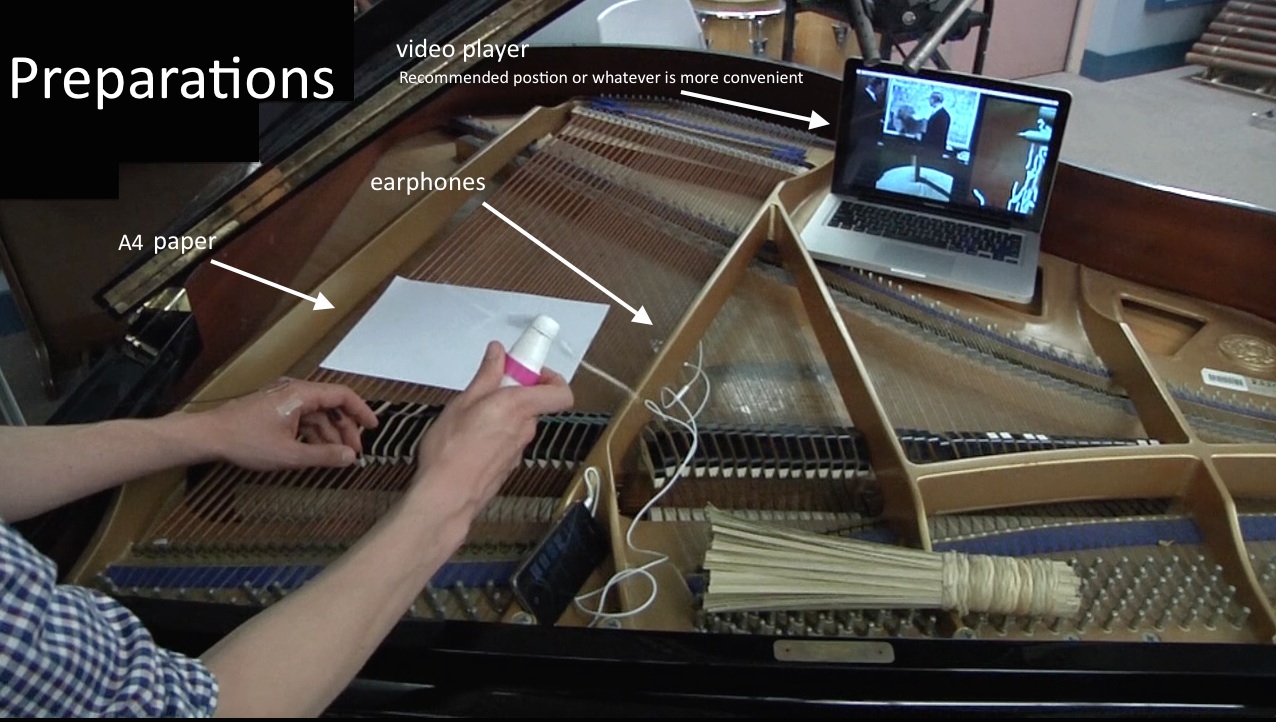 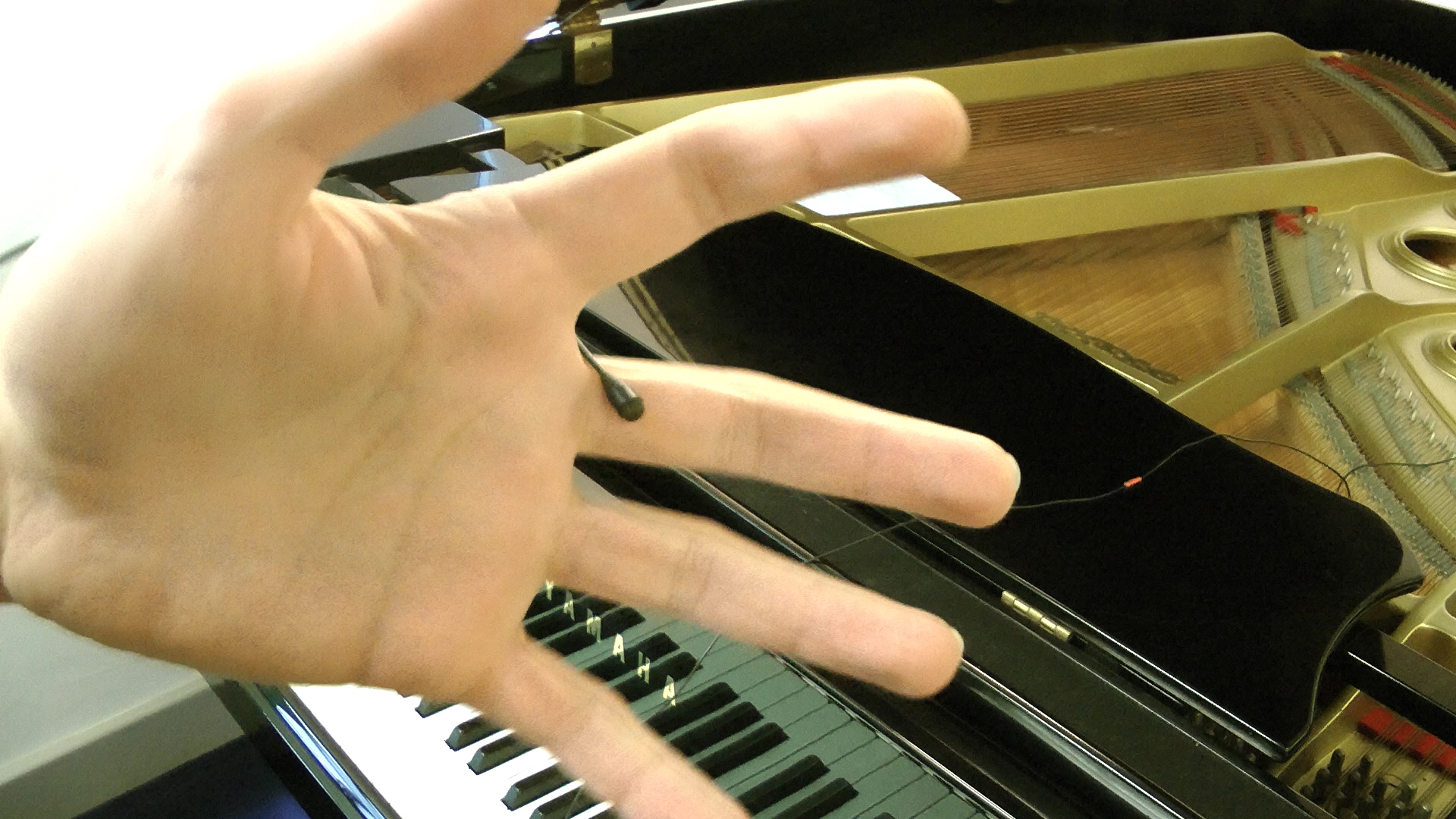 The performer is instructed to move their L.H across the piano in various ways (see below). Sound is picked up inside the piano and is played through a speaker. A single speaker is positioned in the centre of the stage facing the audience.

Be careful not to cup your hand over the mic or cover it inside the piano as it will feed back. Keep hand open to avoid this.

1.  Follow (follow where the other hand is moving and the sound it is creating).
2.  Off (take mic away).
3.  Wave like motion near R.H. object (wave mic towards and away from the object making sound by the right hand (R.H) – so the sound fades in and out). Two varying rates are used which are notated below.
4. Wave like motion near earphones (wave mic towards and away from the earphones playing the Mapping Australia audio track -The same two varying rates apply (below).
5. Lapel Mic with instrument (L.H) in the same hand.

The two variations of wave like hand motions are: 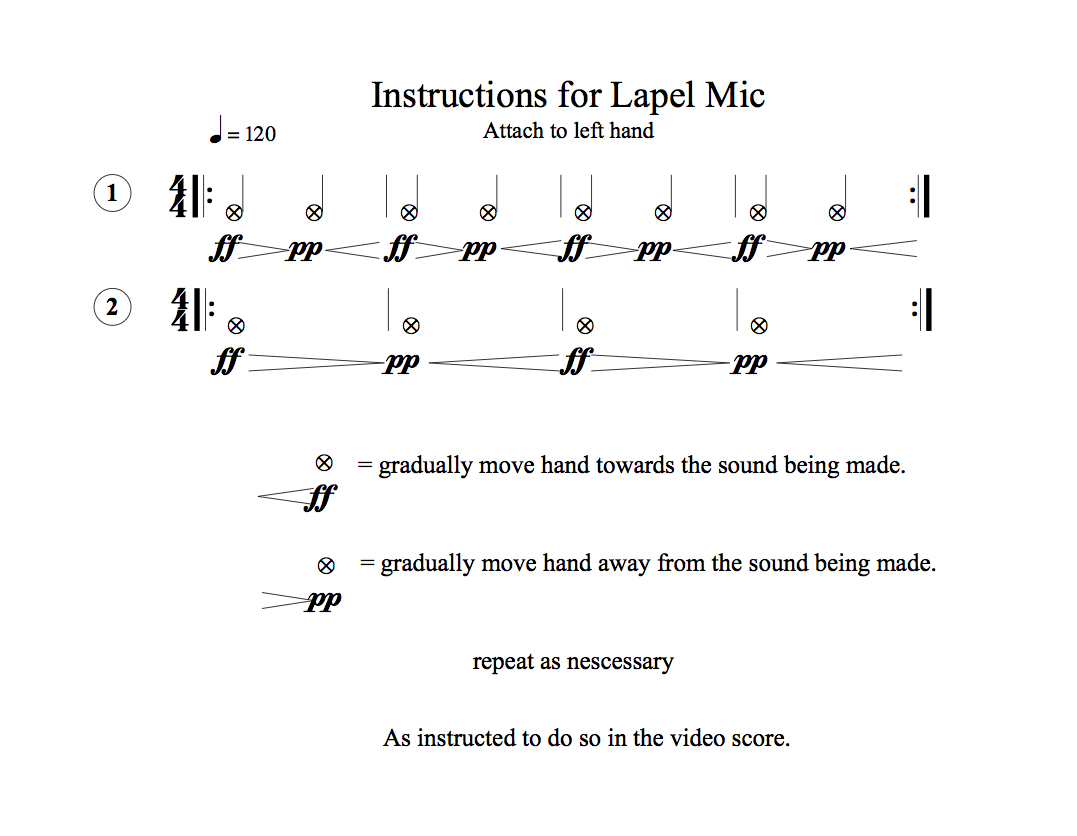 Sheet music is also given to the performer in addition to the video score (see below).