for cello, trombone, and recorded media 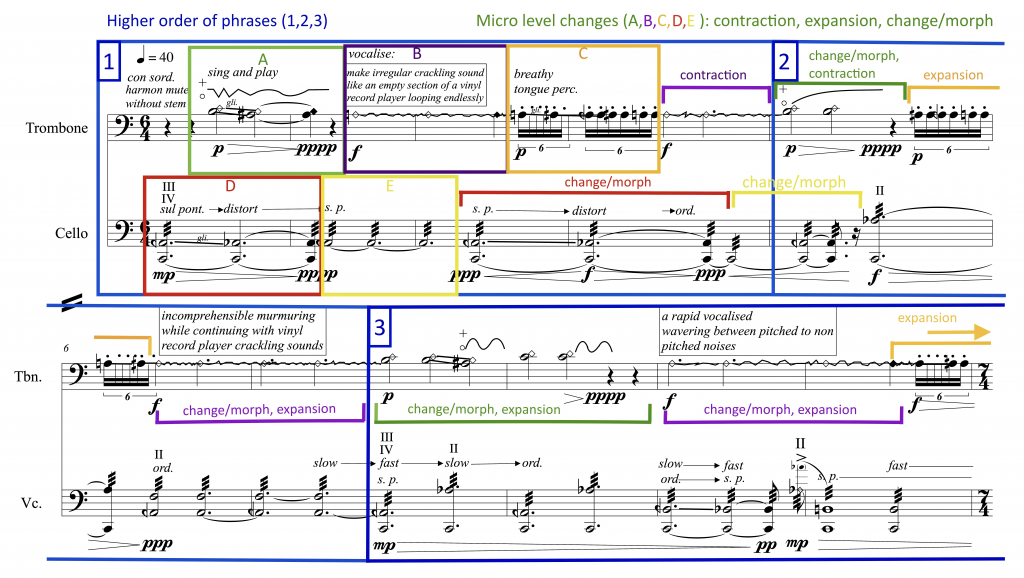 A tape machine is placed on stage and is turning but not producing any sound from its speakers. Small speakers are spread out across the space and are playing the recordings of multiple tapes crackling. The tape machine acts as a concrete visual representation for the listeners to associate with the sounds. The set up creates a dislocation between what appears to be a sound source (the tape machine) and the actual sounds coming from the speakers. The speakers were placed around St Paul’s Hall near the entrance, on the audience’s seats, to the left and right of the audience and behind them. The speakers played textured sounds, such as various grainy crackling noises that provide spatial colouring to the listening experience. Each speaker had its own channel of sound which looped repeatedly throughout the performance. The tape sounds on each channel moved at different speeds with varying degrees of noise. The sounds are low in volume, not intended to be distracting, and could easily be drowned out by musicians on stage. As the speakers are situated around the performance space, the audience are aware of their presence as they take their seat. 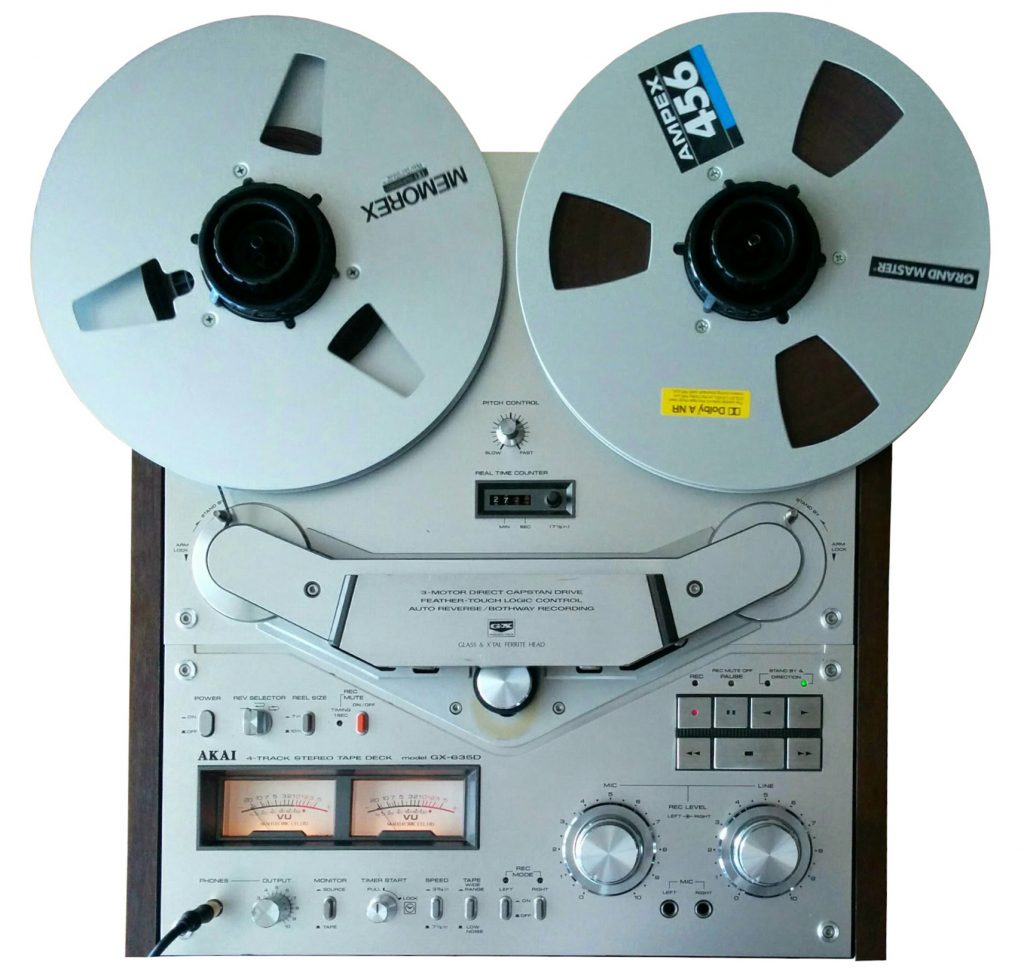 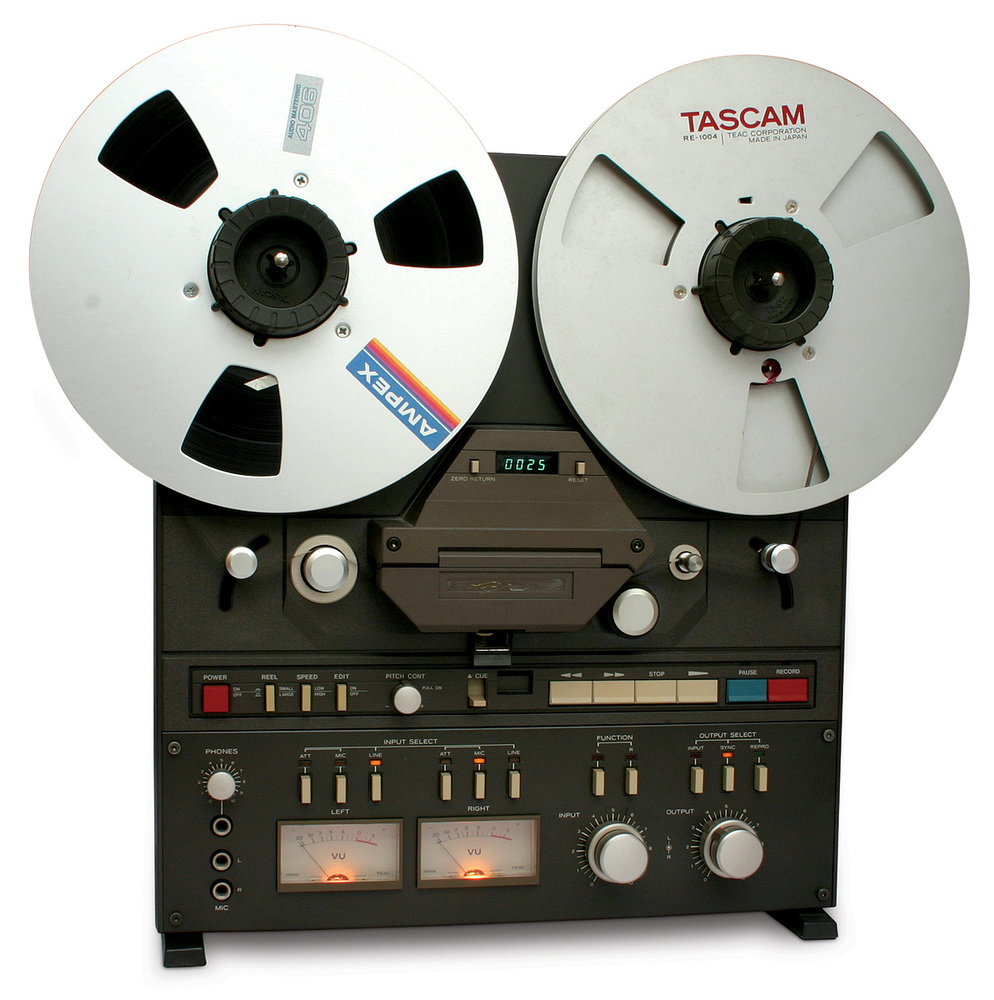 My interest in these subtly changing textures where I work with different levels of magnification is directly connected to my experiments with the video camera. By zooming in on objects with the camera, details of the texture of surfaces are revealed that display a more dynamic and complex liveliness than can be perceived by the naked eye. Memory Tape is a further study of that formative experience of following lines on the ground with a video camera and the constantly changing shapes and densities of detail revealed. Examples of the way in which I magnify micro-particles of sound can be seen in the ‘cello part, where there are changing transitions of bow position. For instance, from sul ponticello to distortion in bars 1-2, with a gradual transition to soft dynamics which I refer to as a low level of magnification. The changing microscopic grains are influenced by the bow position and the grinding tremolo with its changing speed, as well as the beating sounds that result from the microtonal pitches. Stasis comes from the slow overall pace of the piece, reinforced with some sustained notes such as the low C in the ‘cello at the beginning. There are subtle microtonal changes but this still gives a sense of an overall evenness and continuous sound resulting in a drone effect. Inside this slow pace is the ebb and flow of faster dynamic movement such as when the ‘cello plays fast rough edged distorted tremolo sounds.

Pitch is typically organised around an exploration of beating effects as a result of two tones moving in and of phase with each other. Both the ‘cello (using double stops or pp multiphonics) and trombone (playing and singing) create these pitch phase shifts moving in and out of relation through intervals of major and minor 2nds and 3rds, 4ths, 5ths, microtonal shifts, and glissandi. Shifting rates of beating patterns create a densely textured and dynamically multi-faceted soundscape.

Compositionally, there is a broad spectrum of parameters covered across the course of the piece, resulting in a variability of sound identities which generally have a short life span and do not necessarily connect in motivic ways. The image above shows an example of the short life span of higher order phrases. This non-motivic characteristic is a way of representing a dynamic flow of musical activity where the focus is on changing grains of texture, producing lines of varied frictions and dense multiphonics rather than a single focus of a limited set of parameters or specific sound character. Memory Tape has instances of sounds in a low dynamic range, which allows for moments of reflection, such as towards the end where the trombone bell is placed in water and plays long notes with airy tones of the ‘cello, but this is more part of a global fluctuation rather than a consistent attribute. The focus on the music is not on long term developmental threads through time. The form is more like a winding journey that fluctuates as swarms of textural density.

On a micro level there are some small actions that are repeated but not in such a way that is significant to the form. The piece is not made up of easily categorised phrases in terms of pitch relations even though there are recurring timbres or techniques such as singing and playing simultaneously on the trombone. Even here, the timbre becomes so different, blended and morphed over time that it loses its identity and there is generally no consistent thread, except that its inconsistency is a form of consistency. For me, the overall slow pace, containing faster micro movements created through tremolo, interval dissonance or timbral grittiness, establishes a loose fabric in the music.The sonic template provided by the turning tape machine and its turning wheels guides the piece and frames the placement of the many changing sonic events. However, the changing material is also supported by regularity in the music such as in the ‘cello when it continuously uses a tremolo effect, repeats glissando gestures and the jeté technique, or plays with breathy tones for extended periods of time. These aspects are what can be associated to the looping tape machine. There are gradual changes in timbre with different sonic behaviours that expand, contract and morph over time.